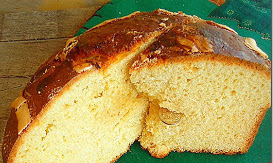 Who gets the lucky coin?

Many of us know of the Greek tradition of the Vasilopeta.  Actually if you don't, then you are NOT Greek.  My kids really look forward to the cutting of the bread so I have to get at least two loaves for the holiday.  The first we will bring to the party we are attending and the second for home.

Bringing a Vasilopeta to a New Year's Eve celebration and cutting it at midnight seems to be more fun when there are guests who don't know anything about our traditions.  This year my daughter's friend brought her boyfriend to my sister's house.  Leah, has been around our greek family for some time and has had to pleasure of cutting the bread.  Her boyfriend was excited to participate for the first time.  Ok so you guessed it.  The "boyfriend, the XENO" got the coin. We all laughed and will remember the year the "Xeno" got the coin.

So now we have to have our own bread at home so a family member can have good luck.  Today as we were cutting the slide between my daughter and son, the knife HIT the coin.  When the pieces were separated the coin was lodged more in his slice than hers.  Technically we were cutting her piece (as she is older) but his piece had the majority of the coin.  Now what?  Lot's of debate, usually we call my brother the Priest but it was Sunday and he was in church.  I turn to Google and You Tube.  It was difficult, I did a lot of searching but finally found something.....when the knife hits, it's DOUBLE LUCK!!! and it goes to the person who the piece was intended for.